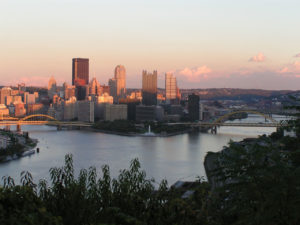 Shortly after noon today, leading broadcasters in Pittsburgh went live with ATSC 3.0.  Sinclair’s WPGH-TV and WPNT, and Hearst’s WTAE-TV, initiated ATSC 3.0 simulcasts of their main program streams.  Over the last year many talented professionals at Sinclair, Hearst and their vendors worked with Tom Mikkelsen, BitPath’s Chief Transition Coordinator, and his team to organize the Pittsburgh rollout of this transformational new technology.

Pittsburgh is often credited as the site of the first commercial radio broadcast in the United States 100 years ago, when KDKA announced the returns of the Harding-Cox election on the evening of November 2, 1920.  In college I wrote a paper about the history of broadcasting.  The stories of how KDKA and other early broadcast pioneers harnessed the magic of spectrum to bring the world its very first real-time mass communications excited my imagination.  Someone I quoted in that paper observed that the new radio broadcast networks, for the first time in history, allowed tens of millions of minds to focus on a single event – even a single voice – at the same time.

The immense power of sending sound and video in real time to thousands or millions of people literally changed the world.  ATSC 3.0 brings that same power to the many kinds of data our information economy thrives on today, and I’m still excited about the possibilities for new forms of broadcasting to change the world.

Pittsburgh is just the second city in which different broadcasters have cooperated to launch full time commercial ATSC 3.0 service.   WPNT and WPGH-TV will soon be important links in the BitPath network.

My stay-at-home-virtual hat is off to the teams at Sinclair/ONE Media and Hearst who made this happen flawlessly, on time and in the midst of the only global pandemic since the dawn of broadcasting.  Everyone at BitPath looks forward to working with other leading broadcasters to help them launch ATSC 3.0 in many more markets this year.